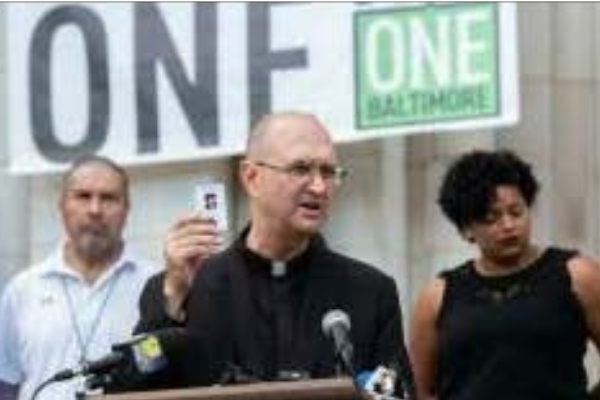 Father Bruce Lewandowski, Priest at Sacred Heart and other clergy speaking about the importance of the new parish ID cards

In the climate of violence that has plagued Baltimore over the last three years, immigrants have often hesitated to contact police to report crimes, fearing that police might involve federal agents which could lead to deportation of family or friends.  Immigrants worked with BUILD and Sacred Heart to design the cards and spoke about the trust that would begin to be restored between the immigrant communities and the Baltimore Police Department. Father Bruce Lewandowski of Sacred Heart stated, "This is just one step toward making Baltimore a city of neighbors and not strangers.”

At a packed church in East Baltimore, BUILD held Mayor Pugh accountable to her June 6 commitments to BUILD One Baltimore by reducing violence through policing reform, education funding, and jobs