Celebrating Organizer Leo Penta, "A Prophet of the Possible" 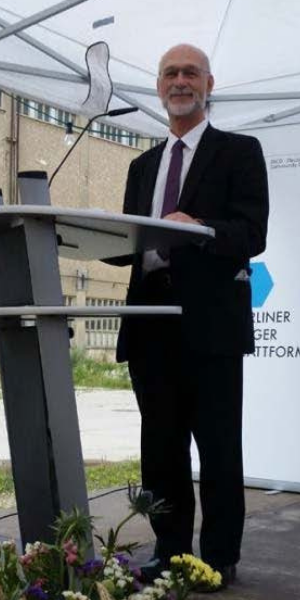 DICO held an action for Leo Penta in Berlin to celebrate his retirement from The Catholic University of Berlin. Leo remains the Director of DICO and will remain the key organizer in DICO's effort to develop 75 acres in the eastern part of Berlin. Below are the remarks of Jonathan Lange at the action.

Thirty-seven years ago, a young priest in New York decided that meaningful ministry in the then-devastated and neglected communities of East Brooklyn required -- demanded! -- a new kind of engagement.  Leo met two IAF organizers -- then-director Ed Chambers and Mike Gecan. Together with other key lay and clergy leaders, they organized a powerful Burger Platform in Brooklyn, EBC. In time, EBC, Leo and the Brooklyn leaders completely re-constructed the abandoned and under-used blocks of that area with thousands of homes for working families.  The value of those 4,000 homes and 2,000 apartments -- now equity and value retained by the African American and Hispanic buyers -- exceeds two billion dollars.

They are still building today -- on a large site called Spring Creek -- which bore, before EBC's efforts, a stunning resemblance to the land we are gathered on this evening.  It was enormous, neglected, underused.  There, like here, it took vision to imagine a whole new community of thriving individuals and families, which is emerging as we speak.

Everywhere Leo Penta has lived and worked since his Brooklyn days, he has been an evangelist of engagement and power -- a prophet of the possible. He continued to define his calling in broad and creative terms.  All of us have benefited from that.

When I needed help 25 years ago to root the Baltimore "Living Wage" campaign in the language, tradition and theology of the church, it was Leo who taught me how to do that.  When Berlin's Catholic University needed to get outside of its walls to fully teach its students, again it was Leo. And when the IAF needed to prove to itself and others that organizing universals were indeed universal, Leo proved that by introducing Community Organizing to the European Continent..

Now they tell us he is retiring, but we don't believe it. Perhaps the University has a mandatory retirement age of 65, but we don't. And Leo has so much more to do. We are so proud of our IAF brother Leo and look forward to many more years from him of practicing and teaching the art of organizing.

I personally look forward to the first ground breaking and the first house warming here on this land.  Whether one is formally religious or not, it is clear that there is a spiritual dimension -- a movement of the human spirit -- in this work.  And no person embodies that spirit more than Leo Penta.