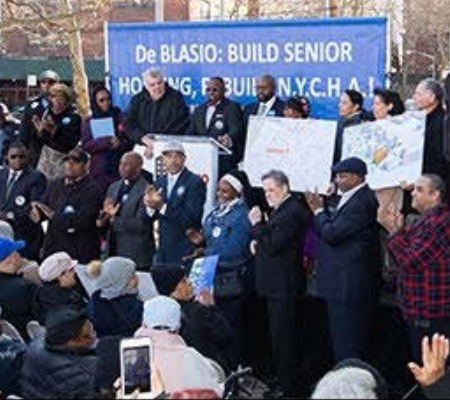 At the action a new report was released calling on the mayor to launch development of thousands of housing units for low-income senior citizens. The report, “A Home for All New Yorkers: Low-Income Senior Housing as a Model for Citywide Affordable Development,” offers a proposal in stark contrast with the mayor's NYCHA “rescue” plans, which involve 99-year leases of NYCHA land for private developers to build luxury apartments.

The new report is available here.

Afterwards the attendees toured Redwood Senior Living and visited 6 apartments to meet the residents whose lives have been changed by the opportunity to live in a 100% affordable, clean and safe community.

Metro NY continues to push the mayor and local officials to develop a real plan with a goal of building at least 150 developments across the city; as well as repair neglected NYCHA apartment units; create affordable housing for young families; protect homeowners; and hold slumlords accountable.

No shelter from the storm: Despite incompetent bureaucracy & inept mayor, NYCHA is finally being held accountable  - NY Daily News

Why Focus On Civic Engagement? Because 'Democracy Is A Full Contact Sport'