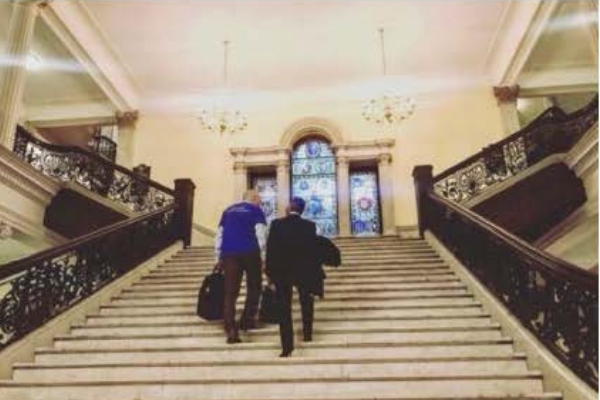 GBIO Criminal Justice Reform team co-chairs Beverly Williams and Alan Epstein at the end of the day, but on to another chapter.

Leaders from the Greater Boston Interfaith Organization, and allies, chanted in victory at the Massachusetts Statehouse on April 13th as Governor Charlie Baker signed a sweeping criminal justice bill into law – the first of its kind in decades. Since 2015, GBIO has fought for strong reforms by targeting four issues designed to reduce barriers to a fair criminal justice system that have disproportionately affected poor people and people of color. All four of GBIO’s priority issues were included in the recent law.

Beverly Williams, co-chair of GBIO’s Criminal Justice Team said, “The new law is not perfect, but it is meaningful legislation for Massachusetts. Reform leaders worked tirelessly for 3 years to make this happen.”  Through legislator meetings, relationship building, and a series of large actions, GBIO helped shape comprehensive Criminal Justice reform bills that, despite early resistance, passed the House and Senate by veto-proof majorities in late 2017. A reconciliation bill proceeded behind closed doors for 4 months.

The ultimate bill still included GBIO’s four issues, as well as many other issues of interest to GBIO and other allies including: CORI reform, raising the felony threshold from $250 to $1200, decriminalizing youth below 12 years of age, allowing juvenile records to be expunged after a period of time, medical release, and most importantly, data collection and reporting for more transparency. The final bill passed unanimously in the Senate (37-0) and nearly unanimously in the House (148-5) and was signed by Massachusetts Governor Charlie Baker.

Co-Chair Alan Epstein said, “It is a huge step forward for the state in our efforts to reduce mass incarceration, eliminate racial disparities, reduce costs and introduce fairness, compassion and intelligence into our criminal legal system. Everyone in Massachusetts will benefit from what we did.”