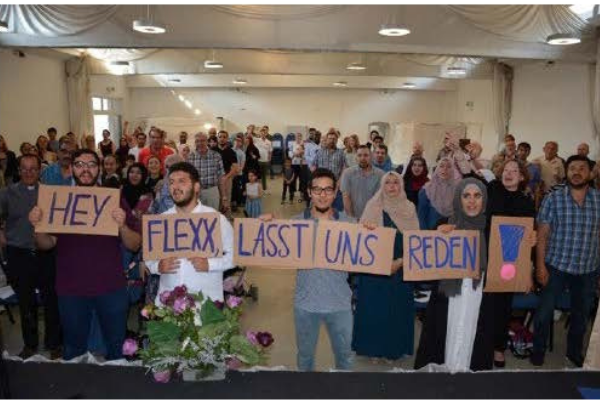 Shortly before the summer holidays began, leaders from the north of Cologne kicked off public campaigns on two new issues that have been in the works for several months. Following up on stories heard in their mosque communities a team of young leaders did a systematic check of discriminatory practices by a local chain of fitness studios. Women with head scarves were forbidden to exercise and men who “looked foreign” were put on a waiting list, while their “German” counterparts were welcomed into membership. The firm refused to react to a hand delivered letter asking for a meeting and so at an assembly on July 5th the leaders launched a social media campaign to shame the owners into talking. (Link to instagram: https://www.instagram.com/p/BzlIYh3INK1/ )

In the midst of a severe housing crunch in Cologne leaders from STARK! also tracked down empty city-leased apartments in several neighborhoods, finding that many were vacant for up to a year or more. These units are part of a contingent of 10,000 apartments that the city government reserves for families in acute housing need. This is a full 20% of the total number of units owned by the city’s public housing corporation. Initial talks with both the housing corporation and the city proved inconclusive, so the team is asking for hard numbers and transparency about just how these apartments are (or are not) being allocated. The head of the Dept. for Social Affairs has agreed to a meeting in August and further talks are being scheduled with local officials who are responsible for allocating the units on a case-by-case basis.