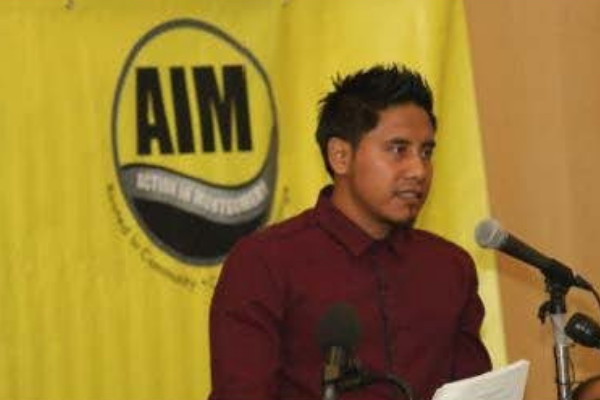 After a deadly gas explosion at an apartment building nearly two years ago that killed 7, including two small children, AIM organized an immensely successful action demanding outcomes and gaining further respect for the most marginalized in Montgomery County, MD. Gaining significant press coverage of the action, survivors of the tragedy, most of whom are undocumented immigrants, identified affordable mental health, rental assistance, and inclusion in the County’s evaluation of the response to the fire as three key issues for four County Councilmembers to respond. All four councilmembers agreed to the demands in front of 236 AIM leaders, and committed to coming back in three months to share the progress that had been made.

Brother Chris Posch, lead Pastor of St. Camillus Catholic Church, opened the night explaining that AIM leaders had listened to over 50 survivors. “In those stories,” he shared, “we heard a lot of pain. Pain of losing family members; The pain of dealing with physical injuries or PTSD, and no longer able to provide for their families. And the pain of wanting a voice to ensure better outcomes if another tragedy like this occurs, but finding that you have none.”

Ms. Victoria, surrounded by family and friends, recounted surviving the horror of the night only to face the challenges of surviving with physical injuries that have prohibited her from working and the ability to provide for her family.

Mr. Gustavo Zuniga described that when the floor collapsed beneath him, he and his wife fell and he passed out. It was his wife who pulled him out of the rubble and the fire. He explained that the psychological impacts of the trauma have made it difficult for many members to continue working as they did before the explosion, thus putting them at risk of becoming, once again, homeless, because they cannot earn the salary necessary to pay rent each month.

An audit of the County’s response was commissioned six months after the explosion, said Mr. Edy, another survivor of the explosion. Quietly, he asked, “Do you know how many surviving families were interviewed?” To a silent room, he answered, “Not one of us.”