Anne Arundel Connecting Together Acts on Housing and Gun Safety 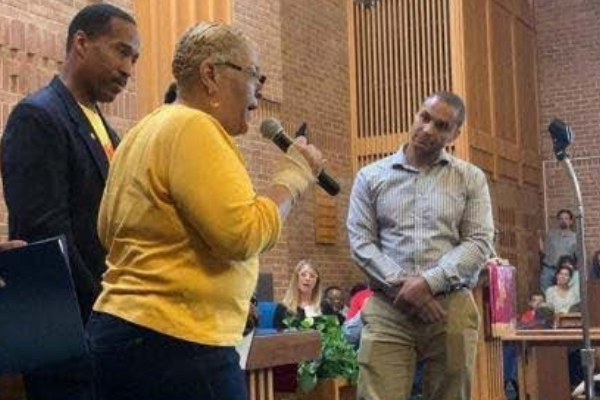 On June 13, over 550 members and affiliates of Anne Arundel Connecting Together packed into Asbury United Methodist Church in downtown Annapolis, Maryland. Front row was Mayor of Annapolis Gavin Buckley, County Executive Steuart Pittman, members of the county council, and other county officials. ACT organized around the issues of gun safety and affordable housing and demanded action

As a result of listening sessions and door-knocking, ACT leaders organized around the poor living conditions and mismanagement at subsidized apartment complex Woodside Gardens. At the June 13 action, ACT leaders living at Woodside Gardens spoke of the unlivable state of their apartments and the inadequate response of management. Invited before them was a representative of the managing company, Fairstead Affordable. After some wavering, the representative committed to address the issues raised by residents. These residents have subsequently met with management.

In May, ACT hosted an education event on Metro IAF’s Do Not Stand Idly By, a plan of action for promoting gun safety. In attendance were the County Executive, chief of police, and a representative of the state’s attorney office. Rabbi Joel Mosbacher spoke about the campaign and members of ACT committed support. On June 13, county officials agreed to support Do Not Stand Idly By. Following the action, on the eve of the Capital-Gazette shooting, the County Executive and Mayor signed onto the campaign.

At the June action, county officials agreed to work with ACT on affordable housing in Anne Arundel County. ACT declared its support of a fair housing law, building workforce housing, zoning regulations, and an affordable housing trust fund. Two weeks later, over 40 ACT leaders showed up to a county council meeting where the council voted in support of a bill to build workforce housing. ACT leaders continue to work with county leaders as they work on legislation.

ACT’s June 13 ACTion was ushered in by the local Unitarian Universalist Church praise band and out with a unifying prayer by a local imam. It was a celebration, as the action accomplished many wins.

Read about it HERE.