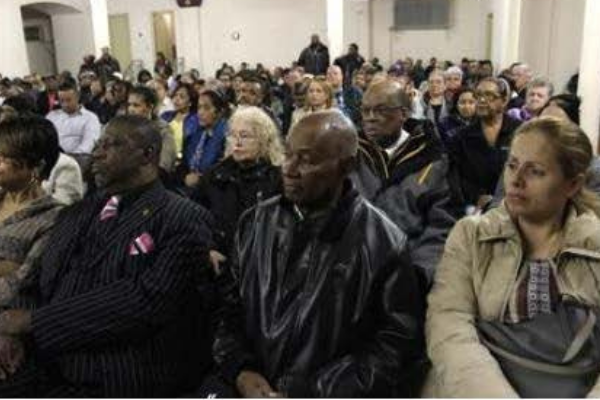 When Brooklyn Director and his managers refused to meet with 200 NYCHA tenants from four developments because the Director’s office could not afford the one hour of overtime, residents decided to act. The action from the Director’s office demonstrated an obvious lack of respect for their tenants. Thus ensued four days of action by EBC and tenants to confront NYCHA managers.  EBC sent a delegation to the Hope Gardens development office to confront the manager for not showing-up. Fr. Hoffman led a group of 25 people, and again, the manager refused to meet with them.

The group conducted a phone bank in the lobby with tenants calling 25 executives and managers from NYCHA, starting with the Chairwoman, and asked the managers to fix the intercom at 120 Menahan Street. EBC ran this action in response to recently posted letters instructing tenants to "call-in" about an intercom that had been broken for over a decade. The logic was that if managers wanted tenants to call rather than meet face to face, that's exactly what EBC would do.

The manager eventually emerged and was furious at the scene. He and his superior offered to take individual complaints, but the group refused to be bought off.

EBC also confronted the Transportation Commissioner, Polly Trottenberg. More than 225 leaders and students from 14 institutions, including a large contingent from Epiphany Lutheran School, came out to force Trottenberg to publicly commit to meet with EBC on Thursday, May 4th.  During that meeting, EBC will continue to build a better relationship and begin to get commitments for much needed speed bumps, traffic lamps and street lamps.