“To elevate the condition of man –
To lift artificial weights from all shoulders;
To clear the paths of laudable pursuits;
To afford all, an unfettered start and a fair chance, in the race of life.”
President Abraham Lincoln’s Message to Congress – July 4, 1861 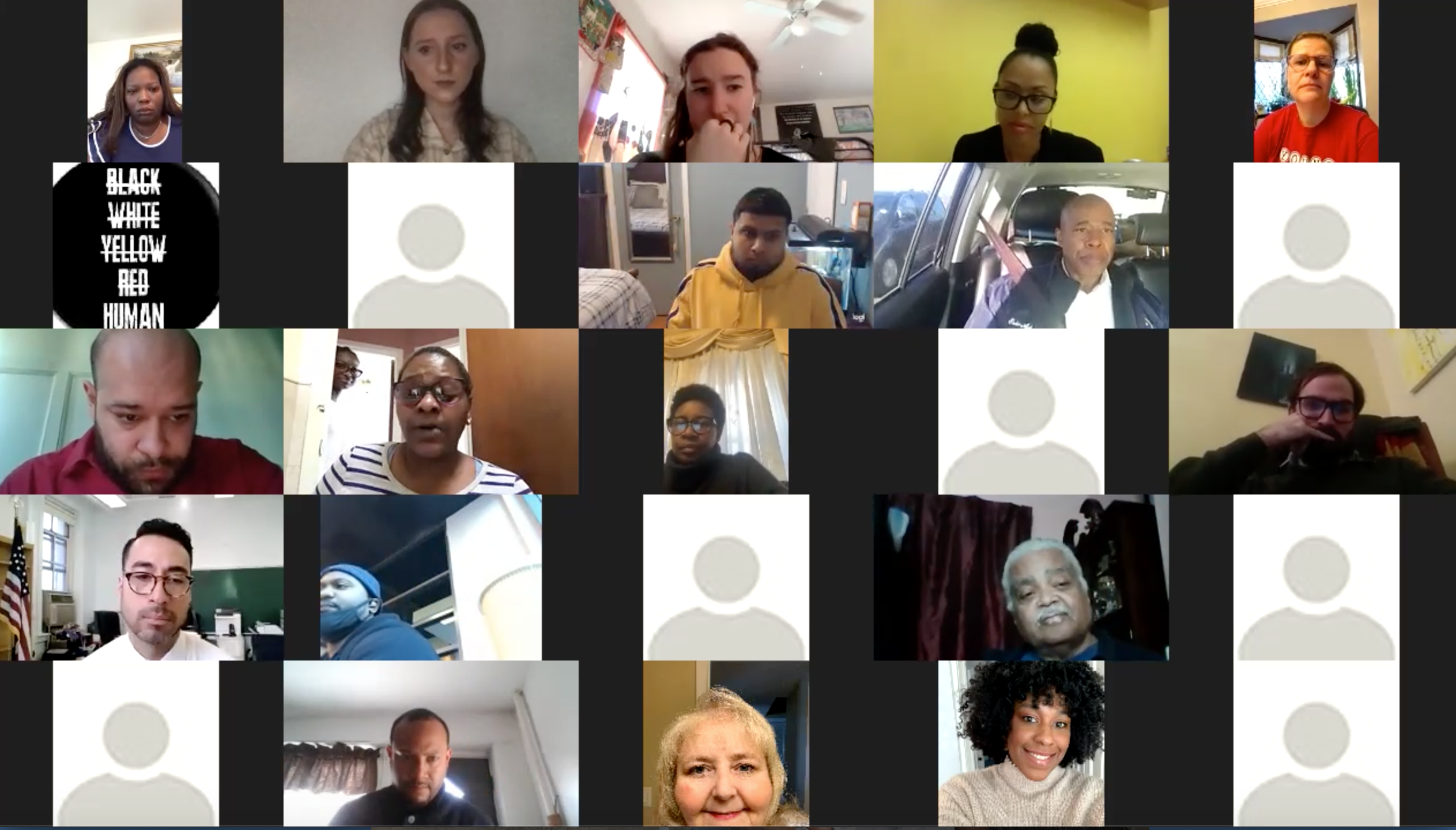 We believe that the role of EBC and its sister organizations in New York City  – South Bronx Churches, Manhattan Together, and Queens Power – is to translate  Lincoln’s almost poetic message “to lift artificial weights from all shoulders, to  clear the paths of laudable pursuits, and to afford all, an unfettered start and a  fair chance in, the race of life” – into reality.

The city is still a place filled with artificial weights – mold on apartment  walls, debt and criminal records borne by many returning from prison, inflated  rents and housing costs that cripple families, inadequate alternatives to  incarceration for those struggling with mental illness and youthful non-violent  individuals, higher property taxes in working class communities, inadequate  health and mental health options, and more.

EBC is not a service organization. It never does for others what they can do  for themselves. It affirms the ability of individuals and families to make their own  way, individually and collectively, once the artificial weights and obstructions and  fetters have been removed. EBC is a non-partisan power organization—building  and wielding power at times with and at times against the public and private  sectors. It consistently engages and trains a widening circle of leaders who want  to expand that base of power and use it to improve the lives of their families,  congregations, associations, and communities. This translates into tangible gains  on a range of issues.

*The PRESERVATION of the largest concentration of affordable rental  housing – the 180,000 units of public housing, including 500,000 New Yorkers – is  a major priority. The removal of mold and lead from all apartments, the  installation of new roof fans to ensure adequate ventilation on the majority of  NYCHA properties that need them, the improvement of repair and maintenance  systems, the identification of sources of new funding for playgrounds, parks  areas, and building upgrades of security, heating, and cooling systems – these are  the key issues that EBC and Metro NY IAF are focused on.

*The NEW CONSTRUCTION of scores of thousands of affordable Nehemiah  homes, affordable apartments, and an entire new generation of affordable senior  housing are key. NYC has been a leader in affordable housing construction since  the mayoralty of Ed Koch. It should continue to lead.

*The ACQUISITION, STABILIZATION, AND UPGRADING OF thousands of  now-affordable rental properties in the communities represented by EBC and its  sister organizations in New York – preserving and improving for another  generation the stock of decent affordable apartments in communities and halting  the march of gentrification.

*The upgrading of existing rental properties with STATE-OF-THE-ART  ENERGY EFFICIENCY systems and the retrofitting of existing public buildings with  these energy efficiency innovations will help preserve properties for another  generation and will allow building owners to use money saved on energy cost to  finance other improvements.

*The equitable reorganization of PROPERTY TAX PRACTICES will end the  long-lasting imposition of homeowners in East Brooklyn, southeast Queens, the  East Bronx, and Staten Island – where working-class residents struggle to make  ends meet.

*Systematic reductions in jail and prison populations depend on the  application of the THREE-PART PROGRAM PIONEERED IN MIAMI-DADE COUNTY  –Crisis Intervention Team training for all police, diversion centers as a first  destination for those apprehended who are challenged by mental illness,  expanded non-police crisis response personnel, and long term housing with  services for the more seriously mentally ill – will result in a 30% or greater  reduction in the jail and prison populations.

*Every improvement of existing criminal justice practices – diversion at the  front end, expungement at the back end, greater access to drivers licenses and  living wage jobs – will make it possible for individuals to find and pursue paths  that are laudable and give them an unfettered start (or-restart) and a fair chance  in the race of life that all deserve.

*Accountability by individuals, by communities, and by the public agency  whose job it is to provide safety to all New Yorkers is critical. That’s why Metro  IAF has called for COMPSTAT FOR COPS – the application of the same rigorous  process that makes specific and transparent the patterns of abuse by officers that  has worked for identifying the small percentage of individuals who engage in  repeated criminal acts. A process of accountability that is spearheaded by a  trusted third-party entity – similar to the way Johns Hopkins has become the  trusted source of pandemic data – will be a plus for both the city as a whole and  the NYPD as a vital part of the city.

*The creation of safe, healthy, lead-free and mold-free housing – whether  new or rehabilitated – is a public health strategy as well as an equity-building and  housing strategy.

*Flexible options for direct community health care – like the testing sites  pioneered in local congregations and associations by Metro IAF early in the  pandemic, which can become vaccine sites as soon as a safe vaccine is available –  should be integrated into the public health approach of the city.

*Parks and playgrounds and walking and biking paths should be upgraded  and expanded, where possible, so that all New Yorkers have access to open space  for play and exercise.

*Beginning 25 years ago, EBC and Metro IAF spearheaded the creation of  the first generation of new, smaller, public high schools. Then Metro welcomed  the arrival of high-quality independent public charter schools and public charter  networks – Achievement First, KIPP, and Uncommon Schools – that provided alternatives and choices to the parents and students in New York’s African and  Hispanic communities. The integration and coordination of these schools –  traditional public, more recent public, and public charters – should be a high  priority.

*In addition, EBC and Metro IAF identified two areas where progress is still  desperately needed. The improvement of special ed services and programs is  critical, as is the upgrading of existing middle schools or the creation of new high quality middle schools, especially in communities like East and Central Brooklyn,  central and southeast Queens, the South and Northeast Bronx, and upper and  lower Manhattan.

OTHER CRITICAL ISSUES – BOTH LOCAL AND LARGER. EBC and Metro IAF  have focused, and will continue to focus, on other important issues in the city. An  ongoing process of individual and house meetings – listening sessions – is  consistently used to identify new issues and new leaders who are willing to take  ownership of the resolution of those issues. But, for the sake of brevity and  focus, the leaders have decided to emphasize the issues mentioned above as a  starting point.

Metro IAF began in Queens at the start of the first Koch administration in  Queens. Then EBC began in 1980, followed by South Bronx Churches and  Manhattan Together. The Queens and Brooklyn organizations began in the midst  of an era of life-and-death civic struggle – with the near-bankruptcy of the late  1970’s, the loss of population that occurred into the late 1980’s, and the epidemic  of murder and other violent crimes that peaked in the mid-1990’s. Our leaders  and organizations helped lead their communities and the entire city out of that  period into several decades of massive affordable housing construction,  plummeting crime rates, and major improvements in public education and public  transit.

The city’s institutions – including our organizations – face another period of  struggle today. But we are prepared to face every challenge so that we, with  many allies and partners, work to elevate the conditions of every New Yorker in  the months and years ahead.