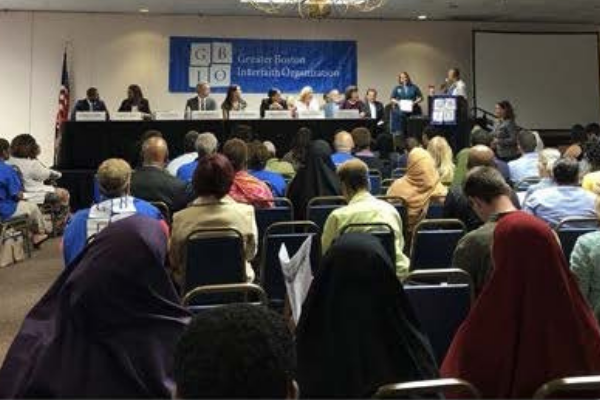 At a Primary Accountability Action, 537 GBIO leaders secured commitments from both Democratic candidates for Governor, Jay Gonzalez and Bob Massie, to contribute $50 Million to a Homeownership fund and to stop a healthcare merger estimated to cost taxpayers $230 million annually.

The merger, between healthcare giants Beth Israel Deaconess, Lahey and others was announced in 2017. Earlier this year, the MA Health Policy Commission came out with a report concluding that the merger would conservatively cost the state’s citizens $230 million per year.

The two candidates were asked: “Will you direct the Public Health Commissioner and Council Members to oppose and stop any mergers or other market transactions that are found by the HPC to increase costs for consumers?” Both Massie and Gonzalez answered Yes.

The two candidates also agreed to increase funding for home ownership by at least $10 million per year for at least 5 years, for a total of $50 million and (if elected Governor) to attend a 2000 person action in the fall. Jay Gonzalez won the primary and will face off against Governor Charlie Baker in November.

GBIO leaders also engaged candidates for District Attorney from Suffolk and Middlesex counties in a series of questions about Bail Reform, Sentencing Reform with a focus on mandatory minimums, and Data Transparency, securing public commitments of Yes on all questions from both candidates vying for Suffolk County DA in November.

7 candidates for DA attended the GBIO event, including Evandro Carvalho, Linda Champion, Mike Maloney, Shannon McAuliffe, and Rachael Rollins of Suffolk County (in the first contested race in decades) and Donna Patalano and incumbent Marian Ryan of Middlesex County. The candidates were asked to provide yes/no answers to a series of questions and were also given time to present their views in an open format.

Greg Henning, the frontrunner in the race, had committed to attend the event in April, but changed his mind just days before the event, objecting to the “yes/no” format. On September 4th, Henning lost the race 20,719 to 35,188 to Rachael Rollins, who answered YES to all of GBIO’s questions.

Will you institute a policy prohibiting every prosecutor from seeking bail unless it carries the possibility of a state prison sentence?

Watch the live stream video of the accountability action here.

GBIO had hoped that the Dearborn ribbon-cutting ceremony would be an opportunity to celebrate the school’s opening, the culmination of an almost decade long effort. GBIO leaders, including then-President Rev. Hurmon Hamilton, fought to replace the Dearborn’s deteriorating middle school building with a state-of-the-art grade 6-12 STEM Academy that could provide a top-notch education to students in its under-served Roxbury neighborhood.

Rev. Hamilton returned to Boston from California to attend the ceremony, but the celebration became a demand for action when, just a few days prior to the school’s Sept opening, many key staff positions remained unfunded. “It’s really an abomination to have this amazing STEM building and not have adequate staffing,” said the Rev. Burns Stanfield, current president of GBIO. “It really sets kids up in this neighborhood for failure.”