The Anti-Violence Strategy That Will Work 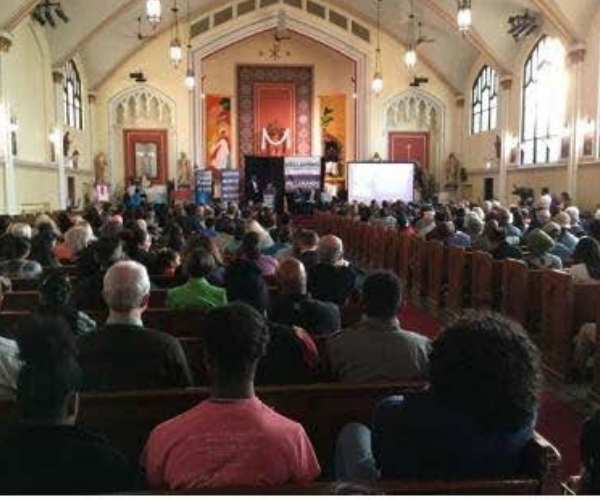 As bullets fly and bodies drop in our city, there is much talk about how to curb the casualty count and reclaim our streets and communities.

While many decent people and groups are trying a wide range of approaches, we know of only one sure way to stop the mayhem.  Thursday evening, May 25th, we celebrated that solution, on the southwest side of the city, not far from the shooting galleries that several nearby neighborhoods have become.

It might surprise people to learn that the solution is not another city program, or social service expansion, or therapeutic response.  These services are needed but not sufficient.  We respect those who propose and implement these responses.  But our neighborhoods are laced with multiple programs and agencies.  Yet the guns keep blazing, and the young keep dying.

Thursday evening, leaders from United Power for Action and Justice and its southwest side affiliate, the Southwest Organizing Project (SWOP) celebrated the completion of the first phase of an effort to rebuild the southwest side and the start of the second phase.   After several years, during which a hundred units have been renovated, we have seen striking results.  Crime is down 50%.  The two local schools in the immediate area, Morrill and Fairfield, have improved their performance -- rising from low Level 3 CPS rankings to Level 2 and Level 2+.  The school just south of the area, Marquette, has gone from Level 3 to Level 1+.  Local private contractors have followed our lead and bought and renovated other buildings in the area.

In other words, this portion of the southwest side is approaching a state of normalcy -- is being made whole.  The naysayers will say that this proves nothing, but they would be wrong.  Thirty years ago, in a community more devastated and more violent than the southwest side, community and religious leaders came together, raised funds, and began rebuilding an entire neighborhood of 300,000 souls.  The group was called East Brooklyn Congregations, the sister organization of the IAF affiliate in Cook County, United Power for Action and Justice.  Since then, EBC has built more than 4,000 homes and 2,000 apartments.  It has spearheaded the complete reconstruction of a community as hard-pressed as Englewood or the Back of the Yards.  The murder rate has fallen from a city wide high of 2,250 to a modern low of 350 -- an astonishing drop that continues.  New school campuses have been built, not closed.  New families have flooded in, not flooded out.  All the buyers and renters have been working class African Americans and Hispanics, many who lived in or near the area, not gentrifiers.

In other words, an area as large as the entire south or west sides of Chicago has been returned to a state of normalcy.  An incoming New York police chief, Ben Ward, was once asked what was the most effective crime-prevention strategy of the NYPD.  He said: "That's easy;  the Nehemiah homes."

Rebuilding and renovating every single home and building, block by block, neighborhood by neighborhood, is the way to stop the violence in Chicago.

On a practical level, it removes the space that criminals can use to stash drugs, lie in wait on their enemies, or hide from police.

It conveys to all existing neighbors that there is hope -- that the area is moving up, not down.  And it retains those working families that we need to make our city thrive.

It communicates to the police and other public servants that these neighborhoods are not lost causes, that they deserve to be protected and preserved, that the risks they take in doing so have purpose.

It creates blue collar jobs in the construction and renovation work and more blue collar jobs later -- shop keepers for stores for new residents, lawn service workers for those who need that service, locksmiths and others who help secure the new homes and buildings.

It delivers what every person in our fair city deserves – safe streets, an affordable home, and decent schools.

We know that this approach -- long term, deliberate, led by the parents and seniors and youth of local congregations and schools, grinding out gain after gain after gain, without the benefit of a long touchdown pass -- is not attractive to those who seek (or claim) a quick fix and magic solution.

But this is the way to rebuild Chicago.  The only impediment is private sector support to speed the work up and start on the west side as we continue to turn the southwest side around.

Read more about it here: