At GBIO’s first Muslim Teach-in, over 100 commit to fighting discrimination 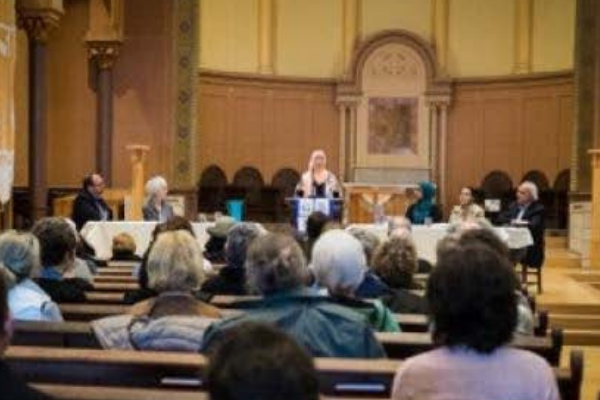 120 people attended Greater Boston Interfaith Organization’s first in a series of Teach-ins, part of GBIO’s new Out of Many, One campaign which addresses the targeting of Muslims and immigrants. At the teach-in, members of GBIO and the Islamic Society of Boston Cultural Center (ISBCC) shared experiences of being Muslim in Boston, and Shannon Erwin and Yusufi Vali, Executive Directors of the Muslim Justice League and ISBCC respectively, gave an overview of specific threats facing the Muslim community. Over 100 interfaith donors committed to making a symbolic donation to the ISBCC or other Muslim organizations, as part of a campaign to interfere with the targeting of Muslims through the tracking of donor lists. 6-8 additional teach-ins will be held over the next several months.