At GBIO Teach-Ins, Hundreds Gather to Learn about Threats Facing the Muslim Community 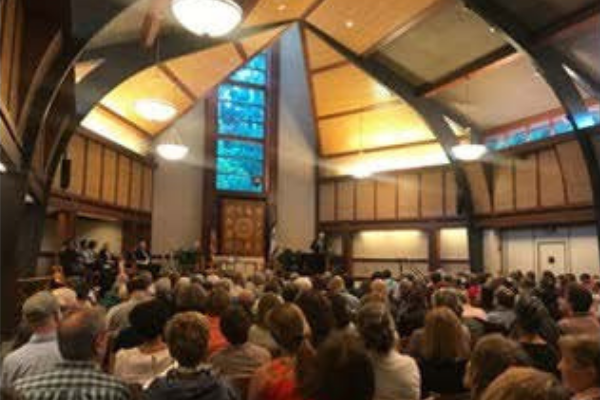 270 people attended GBIO’s and Islamic Society of Boston Cultural Center (ISBCC)’s July 25th Teach-In. Muslim leaders shared perspectives on being Muslim in Boston, and panelists discussed discrimination and Islamophobic policies, including the travel ban, the Countering Violent Extremism (CVE) policy, and potential legislation/Executive Order declaring the Muslim Brotherhood a terrorist organization. 70 interfaith donors committed to making a symbolic donation to the ISBCC or other Muslim organization, to show solidarity, and to disrupt the targeting of Muslims through donor tracking. 60 pledged to join a campaign fighting threats to the Muslim community.

The July event was one of a series of Teach-Ins being held throughout Greater Boston, as part of the Out of Many, One campaign, run by GBIO and member organization ISBCC to address the targeting of Muslims and immigrants. 120 people attended the first in the series, held at First Church in Cambridge on April 30th. Additional Teach-Ins are scheduled for later in the year.

The July Teach-In, at Temple Isaiah in Lexington, began with a short introduction by Senior Rabbi Howard Jaffe, followed by a coffee table conversation between Rabbi Jaffe and Samer Naseredden, the Youth Programs Director at ISBCC. Samer provided his own personal story, responded to some basic questions about Islam, and gave a community perspective.

The second part of the program featured a panel discussion, moderated by Associate Rabbi Jill Perlman, exploring discrimination and threats facing the Greater Boston Muslim community. Panelists included Stephanie Marzouk, an immigration lawyer and co-founder of the Muslim Justice League, and Nadeem Mazen, an educator, entrepreneur, and community organizer who was elected to the Cambridge City Council in 2013 and again in 2015, when he received the most votes across all 23 candidates for City Council.