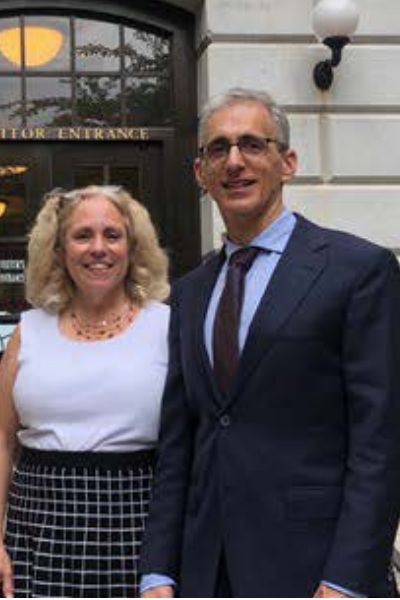 This win left the pair inspired to do more. Now, they are leading GBIO in a legislative campaign to improve health care by (a) lowering the cost of prescription drugs, (b) increasing access to affordable mental health care, and (c) lowering out-of-pocket expenses — and they see this as just the beginning.

Gilbert and Rubenstein share a big vision “the re-injection of human-centered values” into our healthcare system. Rubenstein explains, “our healthcare system is economically driven. Instead, it should fundamentally ensure that people are thriving and healthy.” Gilbert acknowledges that realizing this vision will be a challenge. “The opponents are big and powerful. At GBIO, we need to continue to build our own power.”

For both Gilbert and Rubenstein, the fight is personal.  Gilbert cites the $24,000 her family spends annually on health care as evidence of runaway costs. Rubenstein describes his shock at the “complexity of the billings and charges” after his wife’s two toe surgeries. Both were drawn to action after realizing that many others shared these struggles with the healthcare system.

GBIO made health care history in 2006, as part of the coalition that passed Health Care Reform in Massachusetts, legislation which paved the way for the Affordable Care Act of 2010. After a second legislative victory in 2012, health care took a back seat to other issue areas within GBIO. Says Gilbert, “I was very passionate about moving back into action around costs and access.”  Gilbert became chair of the Health Care Action Team in 2016, after just a few years with GBIO. Rubenstein joined the team in 2017, quickly taking on more leadership, and joined Gilbert as co-chair last year.

For both, working with GBIO has been a powerful learning experience. When Rubenstein learned about GBIO from a member of his synagogue, he was looking for a new challenge. A successful entrepreneur, he had recently sold his company, after growing it for 25 years. Following the sale, he spent a year at Harvard’s Advanced Leadership Initiative program, hoping to move into social entrepreneurship.  “Soon after I joined GBIO, I began going to meetings with key players in the healthcare industry (insurance organizations, hospital groups). The hospital merger became an opportunity for all sorts of stakeholders to weigh in on this question of power.

It made me realize that GBIO’s way of building and deploying power was an exciting model for making change. That’s what keeps me involved.”  Adds Rubenstein, “I’m still in the learning process of how to do this work. You don’t have to be perfect from Day 1. Instead, people take action, learn from the reactions others have, and then act again. There aren’t a lot of places where this way of learning is possible.”

Gilbert worked for years in finance, and then became an attorney, first working in the Attorney General’s office, and then practicing for a decade as an appellate criminal defense lawyer.  She is now in a new career as a reverse mortgage lender, working with seniors and their financial advisors.  For Gilbert, whose careers have been more in line with direct service, GBIO fulfills a dream to have a broader impact at the policy level and gives her the opportunity to grow as a leader. “First, it was exciting to take on a leadership role — making strategic decisions, learning about complex issues, and meeting with policy makers.”  Now, she observes, it is “exciting to help new people step in and lead.”  But she admits that it was a little challenging, when Rubenstein first joined her as co-chair, learning how to “do this work together.”  Both Gilbert and Rubenstein are now going through these growing pains again as they build the GBIO health care team, “learning how to delegate in a positive way.”  Says Gilbert, “at our recent Health Care Assembly in May, people who had never been to an action before told amazing stories. Michael and I each did a small piece but many other people stepped up to make it happen. It was so exciting and moving to see health care, once again, become an issue for all of GBIO. It took my breath away.”