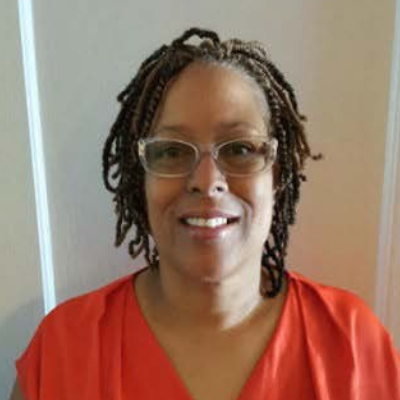 Cynthia Stevenson-Eaglin is a lifelong resident of ward 8.  After being born and raised in Parkchester Housing Cooperative, and graduating from Ballou High School, she moved to Parkway Overlook in 1991.

Ms. Eaglin soon found a church home at A.P. Shaw United Methodist Church (now Brighter Day Ministries) just a few steps from Parkway Overlook. After struggling with drugs and alcohol in her earlier years she credits growing in Christ Jesus for helping her be a light in the community.

Ms. Eaglin got involved in the community. “My best memories are when we had Robinson Place Day. We would cookout and feed all of our children. I can remember feeling so safe that I would leave my door open and neighbors would drop in to visit. We had a real sense of pride in the community.”

Later, when the community got more dangerous Ms. Eaglin kept leading and fighting for Parkway Overlook. In the early 2000’s Parkway Overlook experienced murders and robberies that threatened the sense of safety and community. In particular, Mrs. Eaglin remembers when Dorine Fostion, a graugh her window.  Ms. Eaglin who was working in the office of Parkway Overlook, helped implement security cameras.  She, a few neighbors, and congregation members also began walking the streets, singing and reading scriptures. “There were a couple of buildings in particular that had a lot of problems. I would walk around those to discourage problems. We reclaimed our community”. They worked with Police Seventh District, challenged the Washington Post to shine a light on the lives lost in their community, not just those in wealthier parts of the city, and even got the National Guard involved.

Ms. Eaglin remembers when Daniel and Farah from LEDC came to tell tenants that the buildings were closing down, but they had rights as residents and should exercise them.  She says, “I was nominated from the father above to do this work. I thank God for giving me this assignment to look after this community.”

Mrs. Eaglin is the Vice President of the Parkway Overlook East and West Tenant Association. She works for WMATA as a Metro Bus driver, is now a homeowner a few minutes away from Parkway Overlook, is happily married to Mr. Kevin Eaglin, and is still an active member of Brighter Day United Methodist Church – A.P. Shaw Campus.