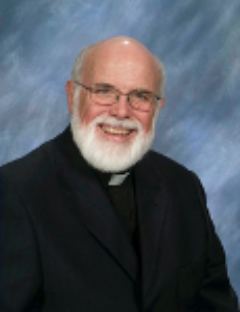 Joe Muth grew up in a working-class Baltimore neighborhood in the 1950’s. The son of devout liberal Catholics, he served as an altar boy before  he decided early on to study for the priesthood and enrolled at St. Paul Latin High School in the eighth grade. Throughout his formative years,  he says he found inspiration in the Catholic priests and sisters he saw taking the lead in civil rights demonstrations, marches against the Vietnam War and actions in support of farmworkers — all, in his view, manifestations of gospel truth and the church’s teachings on social justice.

“I began to think, ‘That’s where I want to be — in the middle of those changes, helping people to grapple with the questions and trying to understand them myself,’” he told a reporter for the Catholic Review. It was in his early postings in Baltimore that Muth, who was ordained in 1974, began learning the necessity of reaching out to those outside his own cultural background.

When he took over at St. Matthew in 1990, Muth says, he inherited a parish that had long reflected the demographics of the surrounding neighborhood — overwhelmingly white from its founding in 1949 through the late 1960s, a mix of Black and white members for the next two decades. But knowing the area was becoming home to refugees from Africa and other continents, he decided it was time to extend another form of welcome.

The center is now an independent nonprofit and has expanded to provide medical services, English classes, job training, tutoring for children and more.   All community members are welcome to these services, regardless of immigration status. The center has served individuals from more than 120 countries, many of whom have become parish members and is fully supported by the archdiocese.

Church policy on LGBTQ affairs is more ambiguous, and Fr. Muth has never been shy about rejecting the view that “homosexual tendencies” are “disordered” and homosexual acts are “intrinsically immoral.” A decade ago, he founded “LGBTQ Educating and Affirming Diversity,” or LEAD, a ministry in which families and individuals dealing with questions of sexual orientation meet for prayer, conversation, and mutual support within the context of church teachings and traditions.

The pastor believes that people don’t choose to be gay, lesbian or transgender, but rather realize they’re oriented that way and understand they must face the possibility of considerable cultural rejection, often in the very places they should be finding comfort.

“When young people discover they’re gay or lesbian, it’s actually a heartache,” he says. “Sometimes they can be on the edge of suicide. In our parish we want these folks to experience a welcoming, loving community of people who can help them discover their beauty and their joy in life.” Muth says he’s grateful the archdiocese has never prohibited his endeavors; Archbishop William E. Lori and Bishop Denis J. Madden have attended LEAD sessions.

If Muth’s stances have, at times, pushed the envelope of doctrine and tradition, he says they’ve at least been driven by a unifying principle.

“This may sound simplistic, but it’s the way I read the Gospel,” he said. “Jesus went after all kinds of people, people that were broken and hurt and sad and lost and grieving. I think the church has to do the same. The church is for all of us who are, let’s face it, messed up in our own ways. It should say, ‘Come in, we’ll figure it out together. All are welcome.’”

After Muth, who will turn 73 this month, says his final Sunday Mass at St. Matthew on June 27, he’ll also be preparing to  start a new life as part-time campus chaplain at Notre Dame University of Maryland in the fall.

He says he’s already looking forward to connecting Notre Dame undergraduates with the tutoring program at the St. Matthew immigration center. “I’ll still be around,” he says.