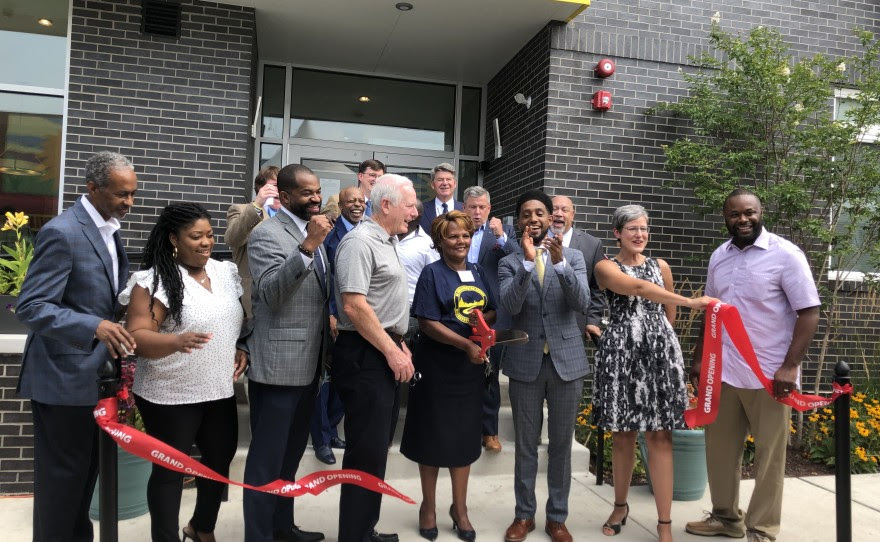 On Thursday, July 8, ReBUILD Metro joined the Johnston Square community, our partners at Ingerman, and a group of City and State leaders in celebrating the grand opening of Greenmount & Chase, a new 60-unit affordable apartment building that marks the first major investment in our $160 million community-driven initiative to Transform Johnston Square. Read or listen to WYPR’s extensive coverage of this project and event HERE.

Mayor Brandon Scott was one of several local leaders to give remarks, along with Maryland Secretary of Housing and Community Development Kenneth Holt, City Council President Nick Mosby, City Councilmember Robert Stokes, State Senator Cory McCray, and Rebuild Johnston Square Neighborhood Organization Executive Director Regina Hammond. Mayor Scott called Greenmount & Chase “the model for how we have to work together in community development,” stating that “this is an example of what progress in Baltimore looks like…not development in community, but development with community.” And, he noted, “we are just getting started.”

To that end, Secretary Holt announced at the event that the State of Maryland will be providing another $2.5 million to ReBUILD Metro to support our renovation of abandoned homes in Johnston Square as new homeownership opportunities for families in need, including 32 abandoned homes on the blocks surrounding Greenmount & Chase. “We have made a commitment to making sure that all of the rehabilitation occurs,” stated Secretary Holt,  “and whatever the gap that exists between the cost of rehabbing and the market value is going to be filled with State capital.”

As the City and State continue to commit resources to Johnston Square, we are excited to share that our Together Rebuilding Stewardship Committee is very close to reaching its goal of raising $10 million in commitments of impact investments to support our revitalization work. By combining all of these resources and continuing to work hand-in-hand with community members, we will together build on the success of Greenmount & Chase and fulfill our vision of transforming Johnston Square into a model for community revitalization without displacement.